That's the sound made by a weary soul falling headfirst into the pillowy goodness of Spring Break. 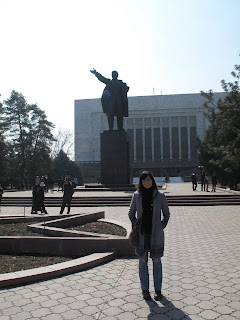 Here is a grand statue of Lenin gesticulating wildly, while I do my level best to look worker-like.
Oh, how badly I need this holiday! I left Australia in December five days after school ended, rushed around Europe in the most madcap way, touched down in Bishkek with all guns blazing, and haven't subsequently stopped until today, midway through March - upon which, the aforementioned soul (and body) understood that it had permission to relax, and did so with gusto.

It's Nooruz today, or Persian New Year. This holiday is banned by many Islamic regimes because of its links with Zoroastrianism, but Central Asia is a law unto itself, and it does love a good festival. I met with my friend A and we walked to Ala-Too Square, which is the centre of civic activity (public holidays, bloody uprisings and the like) in Bishkek. There were throngs of people; the men dressed resolutely in black jackets and their traditional, elongated felt hats, the women colourful and the children all michelin-like and immobile in their puffy jackets and hats. (There seems to be an unspoken rule that unless one is dressed for arctic conditions until April, one will catch his death of cold; I have often been stared at for not wearing a hat on a perfectly mild day). 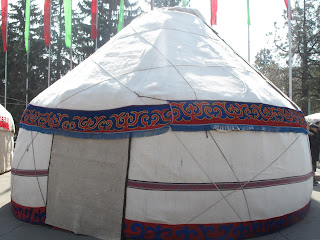 Apart from the crowds, the first obvious signs of festivity were the numerous stalls decked in flowers, many of them equipped with birds and rabbits. The idea is that this is all very Spring-like, and you can get your photo taken with the roses and the bunnies and show people back home in the country the photo of your Day Out in the City. Thinking about it now, I very much wish we'd decided to get our photos taken. But we would have been baulked at - these odd westerners without hats! Most decidedly, this wasn't a touristy festival.


Here is a yurt. And that's really all I have to say about that. 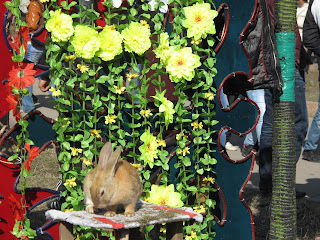 The next indication of unnatural jollity was the music. You could hear it blocks away, and for hours there were performers on stage; all manner of dancing, singing, competitions. Colourful Kyrgyz dances, Russian troupes, local pop stars, even some classical piano. We clapped loudly, but no one else did, and it quickly became clear that this isn't a cultural norm - you don't clap hands to show appreciation, you just stand there and look expectantly for the next act.

Photo booth, complete with paper flowers and cute bunny. There were also stalls with parrots, doves and squirrels; dibs on the bunny rabbit.


We wandered around the palatial compound of administrative buildings where everything was taking place - all looking considerably less dour than usual under a blue sky - through a park filled with fair rides, and towards an extremely pleasant coffee shop, where we sat for a long time and drank coffee and talked of cabbages and kings. Eventually, we paid our bill and wandered back to the festivities and bought some plov (national rice dish made with mutton and carrots - very oily, but very good!) and bread, having decided that the shashlik looked delicious but dripped too much with fat. A pleasant picnic ensued, and we realised that we'd spent nearly five hours feeling completely relaxed, a circumstance worthy of note. I hope to emulate this feat tomorrow, and the day after that, and possibly all the days remaining in this short, sweet holiday. 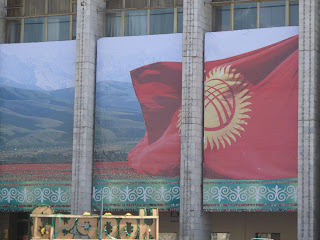