On my iGoogle homepage, there's a column with the weather forecast of ten cities, mostly places I've been to in the last six months. The weather of Bishkek and Athens is not dissimilar - mid to high thirties - but you have to laugh incredulously at London's feeble attempts to be summery. However, even the pale British sun looks inviting when juxtaposed with the solid block of grey rainclouds in Melbourne's forecast! I must confess, I'm glad to be skipping the seasonal gloom there, especially when Bishkek is so green and bright. I like winter clothes - heavy velvet coats, long boots, pretty hats - I like sitting in warm cafes with good coffee while it rains outside - I like fireplaces and roast dinners and all those good things. Lest I forget, however: cold feet, iced-up car windows, dark mornings, early evenings, puddles on roads and pavements, and the general disinclination to get out of bed. If I time it right - calloo callay! - I may miss two whole Melbourne winters in a row.

Of course, I get Bishkek winters in their stead: but six inches of snow and icy pavements are still sufficiently novel to be exciting.

Anyway, there I go, talking about the weather, which isn't at all what I meant to talk about. I fully intended, and still intend, to explain how it is that I've come to appreciate Texas and all things Texan.

There are a disproportionate number of Texans here in Kyrgyzstan. I'm looking after the apartment of a Texan family, my housemate-to-be is Texan, and I've just come home after a dinner with another family from, you guessed it, Texas. When I arrived, Mr T was putting the finishing touches on the flag display over the door: an American flag on the left, a Texan flag on the right, and a set of wind chimes in the middle which was in the shape of Texas and adorned with little cowboy boots. Mr T, an ex-Army officer, explained that he was measuring the flagpoles because legislation states that the American flag, when flying on a house, must always be hung on the left and slightly higher than any other flags in the vicinity. Legislation also decrees that said flag must either be taken down at night, or have a spotlight set upon it; further, if the flag gets tattered in the wind, then it must be burned, not thrown away. But, to the T family, it's the Lone Star flag that really matters. Texas was its own country for a number of years before joining the Union, and this has profoundly affected the way its inhabitants think about their state: there's a song and everything.

Mr and Mrs T have planted a little cornfield in their backyard, and we ate some of it at dinner: I can confidently say it was the best corn of my life. Juicy, sweet, perfectly cooked. I would like to visit Texas just so I could eat my fill of that corn. We also ate a spicy cajun stew and ginger pudding, and it was so good that I grinned like a loony. It occurred to me that I've barely cooked for myself this last month, having been so preoccupied with my study.  Then, we played some Texan card games (the cards had pictures of the Alamo on the back). Most notably of all, I experienced a warmth and hospitality that I've rarely felt since being away from Australia. I felt loved and cared for, and they shared their lives with me in an open and inviting way. These Texans are exceptionally gifted at making friends.

My future housemate has many of the same qualities as my hosts tonight. So does the family whose apartment I'm looking after. What are these qualities exactly? Like many aspects of human nature, they're ineffable, indefinable - the closest I can get to explaining it is that they value hospitality; good food; creaturely comforts; games; stories; they speak a certain lingo, feel a certain patriotism. They make their guests feel very comfortable. Family is important; conservatism is important, but not so important that you can't be friends with people who aren't conservative; God is important, so important that you'd leave your beloved home state to do his work in the world. The T family love the Kyrgyz people very much, and speak about them with such tenderness that I got a lump in my throat. 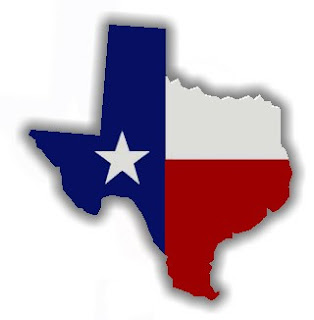 Texans are in my life for good, it seems. So - when I'm back in Australia, you'll forgive me if I say "ya'll" occasionally, or shout "Remember the Alamo!" or look fondly on a lone star flag, or put a little hot sauce on my steak. For, in the words of an immortal fridge magnet: 'Whoever said life was good must have been in Texas.'
Posted by EJK at 1:42 AM