In an effort to become slightly cooler (in both senses of the word) I've taken to rolling up the sleeves of my t-shirt. Some people do this and look effortlessly fashionable: I do it and look slightly deranged, but I don't care, because this perpetual sheen of sweat is really irritating.

I'm waiting for my flight to Almaty (I wonder if anyone in the history of the world has ever flown Chiang Rai - Bangkok - Almaty - Bishkek?) and while the wi-fi continues, I'm going to write. Once on the plane, I have the following things to console me: Tim Keller podcasts, Father Brown stories, Tom Wright's commentary on the pastoral epistles, and a large packet of dried pineapple. Oh, and some sort of pill that I'm told will make me sleep. I've never slept on a plane yet, but stranger things have happened. Plus, I'm pretty tired.

This summer has been a surreal experience: two months, four countries, hundreds of people. I'm not just physically tired - I'm worn out mentally, emotionally, spiritually, and any other way you care to mention. The idea of being in a classroom in two days time is too farfetched to be alarming, and yet that's the way it is. Could I have done these months any differently? I don't think so. America was wonderful - I wouldn't have missed being in Erica's Ithaca wedding, seeing Val in Boston, or experiencing Texas with Aubre, for anything. Nor would I have done it differently in Australia, given the choice. Telling people about Kyrgyzstan was wonderful; hanging out with school and church communities and other groups of friends was a delight; spending time with friends and family was beyond price.

And if you think I'd have gone home without seeing my sister after nearly two years, you're dreaming! 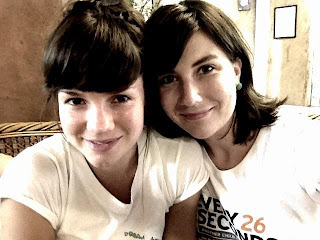 But there's a price to pay, especially for a determined introvert like me. I don't know what it is, yet. But I do know that the God who has sustained and provided and challenged and grown me over the last two years in still in charge, and all this falls within his mandate of care. That makes me very content.