I filled half a Visy box today with old notepads and files and photocopies and past exam papers. Dust flew in the face of my industry. I gave no quarter to ancient textbooks, nor stopped to have pity on last century's transparencies. Colleagues marvelled at my wrath. When it came to taking down the blu-tacked pictures and poems on the wall, however, I quailed a bit. My Auden, my Donne, my Christina, my Blake, my Dante, my pretty postcards from exotic galleries! So I didn't. I might leave them up till the last, a brightly plastered bit of beauty in that dim and cloistered staff room.

It feels like an ending, but it's not, yet. I still have half a stack of exams to mark, a whole set of reports to write, and four weeks of what, for want of a better description, is going to be relief teaching; filling gaps until new teachers arrive next year. (To explain - our school has an 'Early Start' program: the 2011 academic year begins for us in November after exams, so Year 10s become Year 11s, etc.) I've been given everything from Year 12 English to Year 8 Geography, which is a peculiar way to end my time here - a sort of twiddling of the thumbs. Of course, the days will be extremely full, but I will be relieved of much responsibility. Also, the days will be summer days, which casts a sunny glow of happiness on everything.
I quite like the idea of sending a box of books to myself, and am beginning to think about its contents.The Traveller's Guide to Good Health has been stipulated as necessary material, to which I reluctantly acquiesce. A couple of books on missiology and practice are also required reading. Still, there is plenty of space for other volumes; but the task of deciding which of my four-bookshelves-worth-of-books deserves an adventure in Central Asia is utterly overwhelming.
So...what do you think I should take? What would you take?
(It's kind of like that question - if you were stranded on a desert island...)
Posted by EJK at 2:16 PM 1 comment:

10 Things You Didn't Know About Kyrgyzstan

Two months out, and I really should begin my blog. So, I present Kyrgyzstan to you, in the form of interesting scraps of information:
1. Scrabble-wise, Kyrgyzstan is worth 29 points, and that's without any double letter or triple word bonuses. This is directly relevant to us all, because the official rules of Scrabble have recently changed to allow proper nouns such as place names. Yes, civilisation as we know it is collapsing. That's why I'm leaving it.

2. In Kyrgyzstan, instead of putting milk/sugar in one's tea, one adds a few delicate drops of jam. JAM. In TEA. A couple of very devoted friends have experimented, with mixed results; I myself lack the courage at this point in time.
3. Borat, that champion of Central Asian culture, is not from Kyrgyzstan, but you were close. Kazakhstan is right next door.
4. The national game of Kyrgyzstan is Buzcashi, in which men on horseback vie over a headless goat. This may be quite a telling feature of Kyrgyz culture - I'm really hoping to see it. (Did I say that in a sarcastic tone? You decide). 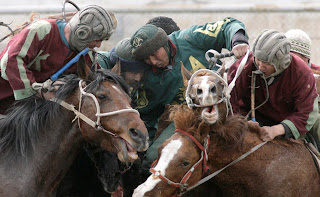 5. 94% of the country is 1000 metres above sealevel - 75% of the land is covered by mountains, including some of the world's tallest peaks. In amongst all the mountains are 40,000 rivers and 2000 lakes. That's some serious nature, folks. I'm taking my hiking boots. 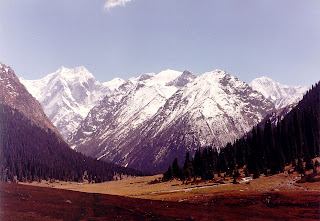 6. One of the longest epics in the world comes from Kyrgyzstan. It's called Manas and tells the story of the migration of the Kyrgyz people under the leader Manas: I haven't read it, but he sounds like an odd mix of Moses and Achilles. Here is an extract; how's this for Homeric tension?
When he was hit with a club,
Without a moment's pause,
Your falcon really let loose.
Without a thought for his own life,
Without a moment's pause,
Without a thought for his soul,
His face looking like wheat smeared with oil,
His eyes clouded over like an evening fog,
His eyes became red like fire,
He really became thirsty for blood.
7. The largest walnut forest in the world is located in Kyrgyzstan. Random, true, and improbable fact. 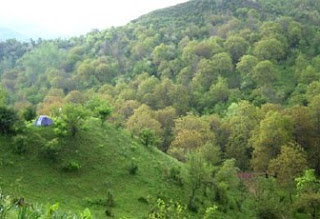 8. Kyrgyzstan was a crucial stopover on the Silk Road trade route, in particular the city of Osh.
9. There is a Kyrgyz tradition of kidnapping a woman for marriage, a practice which came back into vogue after the fall of Communism (when it was outlawed). Perhaps I need to get in the habit of carrying a brick in my bag.
10. While the flag of Kyrgyzstan may look like a baseball, it's actually a tunduk (seen from below) which is the roof of a yurt, the nomadic hut of the Kyrgyz people. 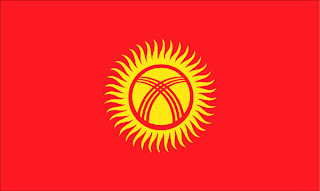