This is What I Mean When I Talk About Snow 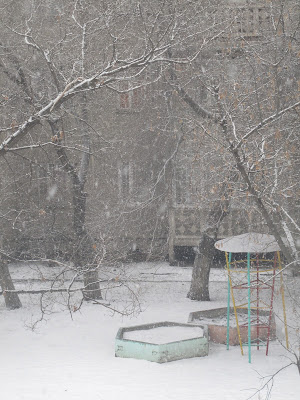 When I leave for school in the morning, it's still dark. I am buttoned into a heavy coat with scarf and hat and gloves and furry boots; bound up like a papoose and slung about with laptop and shoulder bags. The paths are slippery with old ice and the air is hazed with smoke. High-heeled fur-collared Russian mothers walk their unsmiling children to school; young Kyrgyz men stroll, privately and grimly, hawking spit in the gutters, to whatever profession keeps them outfitted in leather jackets and cigarettes. Stray dogs shake off the bone-chilling night and ready themselves for survival. There's one road I must cross, and it's bumper-to-bumper marshrutkas, so I wait for the light which signals my pedestrian's right and cross boldly (because without boldness, a pedestrian in Bishkek is doomed to life on the kerb).

The gates of the school are under 24-hour guard; I press the button and hope to be recognised - the guards are slowly getting to know this new teacher, with her bright red bag and purple hat, but they are suspicious in their bones and like to make sure, so they follow me up the stairs until reassured that I do, in fact, belong here. This impression is undoubtedly strengthened by my inability to reply to their Russian interrogatives.

It's a relief to get to the teacher's lounge and divest myself of all these accoutrements. It's so warm! And there's filter coffee waiting. This is how Americans drink coffee - and with a powdery substance they call 'creamer'. It's only half-bad. There's a teapot too, as a concession to the British and their colonial counterparts, but no one here's really got the hang of tea. Someone makes a really strong pot early in the morning and refills it with boiling water throughout the day; you pour yourself an inch of this potent brew and top it up with hot water. Needless to say, there's no milk, but in the morning a hot cup o' something is so needful that I throw scruples to the wind.

On Monday, Wednesday and Friday, lunch is served in the teacher's kitchen. This is part of the parents' service to the school. Huge pots of plov (a traditional rice dish cooked with spices, carrot and lamb) or curry or soup appear on the stove by midday, accompanied by spicy Korean salads. There are also rice cookers, filled and steaming perpetually. On Tuesdays, homemade pizza and muffins are sold in the assembly room, so Thursday is the only day I need to remember lunch; and even if I forget, there are some street food stalls a short walk from here.

I laid claim to a desk, and no one seems to mind, so I'm building a three-walled castle around my laptop out of books, with papers for mortar.

The curriculum is an odd mix of ICGSE, which is a UK/international certificate, and American college preparatory subjects. Both of these approaches are unfamiliar, so I'm starting small: a three week unit on poetry, a six week study of The Great Gatsby, an Ethics course. The big picture will, I hope, present itself in due time. I've also volunteered to help with Sport on Fridays. My own Russian lessons begin next week.

So, that's my working day. If the opportunity to take pictures presents itself, I shall take some!
Posted by EJK at 8:26 PM 2 comments:

I crunched through a fresh snowfall in the semi-darkness this morning, on the way to school; it sparkled in the dimness. By this afternoon, though, the pristine pathways had become dirty slush. 'Twas ever thus, but especially in Bishkek.

There are enough stray dogs and cats here to break a strong man's heart. Of course, the human brokenness is just as prevalent and more profound, and the animals are perhaps a symptom of that. The dogs are scruffy, ribby, mangy currs of all varieties - they dodge traffic and hide shivering behind trees and subside on bread scraps. The cats fare a little better, being essentially cattish in nature and better able to fit in warm places - but when I saw a grey kitten in a gutter yesterday, tears sprang to my eyes (and immediately froze there).

I've taught a couple of classes now, and I have this to say: these children are extraordinary. They are sensitive, observant, friendly, responsive - all the things teachers wish we could say about our students, and rarely can. They are keenly aware of what's going on in the world, and their hearts are soft and alive to the needs of the people in it. While I'm grappling with unfamiliar curriculum and texts and stressing needlessly about how to assess, they're graciously willing me on and encouraging me. Yes, I'M being encouraged by THEM. I wish every teacher could have this experience.

That said, there is a lot of hard work to do, in planning and documenting the semester ahead - oh, and how I'm tired already! I'd like to be sleeping better. But I had a meeting with a team of people from my organisation tonight; a couple of other teachers, a woman who works with the homeless, a guy who's training young Kyrgyz men in small business. Very encouraging to share stories, build a support network, and learn about the work that's going on here.

I'm sorry I don't have photos yet - the opportunity hasn't really arisen. Soon, I hope!
Posted by EJK at 9:57 PM No comments:

Well, my neighbours have invited a hundred friends over to drink vodka, listen to minor-keyed Russian tunes with thumping beats, yell the words and stamp in time and generally do their best to bring this Soviet party to the people. It's my first teaching day tomorrow, but I relinquish the thought of sleeping much beforehand. And as I was lying in bed, listening to the chorus of the fourteenth dance remix, it occurred to me that my time would be better spent on a blog post from Bishkek. So here it is, a bleary-eyed postcard.

It's been practically a week now, and the shell-shock has nearly worn off. After an idyllic three weeks of doing civilised things with good friends in beautiful Europe, the first few days in Bishkek were like being dunked in ice water; apart from the obvious metaphor, it's about -10 degrees Celsius during the day, a phenomenon that this delicate Irish-English flower has never encountered before. The streets are paved with black ice - it has the glossy consistency of smooth, convex glass. This makes the footpaths treacherous, except for the random places where sand or salt has been scattered. I've learned a sort of shuffle that makes walking easier. I've only fallen over once, in front of two little girls in a playground, who exchanged superior glances with each other as I dusted off my behind. It promises to snow tomorrow, which means the piles of old dirty snow will be hidden briefly.

Apart from walking, the main way of getting around is public transport. The first option is buses; do you know the scene in Harry Potter where Ern, the crazy driver of the Night Bus, squeezes through traffic at a terrific pace? That's kind of what these bus drivers do; there are no lines on the road but about three lanes of traffic, all the same. They accelerate and brake with no warning. This costs about 6 som. The second option is taking a marshrutka; a marshrutka has the appearance of a gnarled and ancient Combi van, and they take numbered routes; there's only a few seats and one handrail, but that's not a problem because you literally can't move for the bodies around you. In the event of a crash, you are extremely well cushioned by fur-coated locals. This costs 8 som, but is quicker than a bus. The third option is a taxi - they're everywhere, but you have to negotiate a price and have the correct change to hand.

Obviously, there are no timetables and no predictability to any of these options, but that's the fun of it! Yesterday, I had my first solo adventure: I took a marshrutka to Osh Bazaar on the outskirts of town. Osh Bazaar is basically acres of market stalls selling everything under the sun. I think I did well; I bartered for a pair of black boots and a nice grey coat and some interesting-looking vegetables. I also bought some fresh doughy things to eat - breads and doughs are a staple in the diet here, and some of them are very nice indeed, filled with assortments of vegetables or meat. Given that I have no Russian yet, it's always an interesting surprise to learn what's in them.

A friendly local girl helped me with apartment-hunting (and despite the Russian archetypes living next door, I like it very much) so to celebrate I took her and another friend to a local restaurant that served authentic Kyrgyz food. We ordered Beshbarmak, a traditional dish of meat and noodles. I understand it's normally lamb; in our case, however, it turned out to be horse; very authentic indeed, and apparently a delicacy. I ate about half but piked out before my sensibilities were permanently damaged. It really wasn't too bad, just - horsey. I enjoyed the yoghurt drink that accompanied it, though I didn't ask the origin of the yoghurt.

It is possible to eat well here: pasta, rice, breads are all easy to come by, and there's plentiful vegetables, though a limited range. The challenge is to avoid carbohydrates and find creative ways to cook well. Part of my problem is that I look at cans and jars and packets and unless it has a picture on the label, I have no idea what it is. Hopefully this won't be the case for long. Osh Bazaar had lots of spice stalls, but I couldn't identify many of them.

The city is quite beautiful in places, thanks to the imposing monolithic buildings, precise avenues of trees, orderly parks and wide open spaces. There are lots of statues of political heroes everywhere, and I have a lot to learn about that era in history.

I'll try to post some interesting pictures as soon as I can; for now, I might try to sleep again - things have died down slightly!
Posted by EJK at 12:12 AM 2 comments: