This is Erkindik Boulevard, something the Soviets did well. I walk this way most days. Erkindik means 'Freedom.' In winter, I imagine it will be beautiful in a different way. 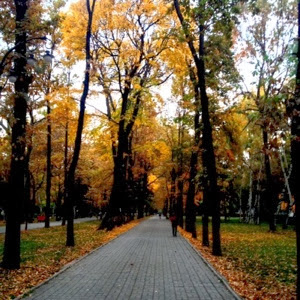 I Saw Three More Things (of a Mildly Humorous Nature)

1. A hot water pipe outside a hospital, insulated with cooking foil and old shirts. Yep, we sho' be ready for winter 'round these here parts.

2. A crew of men trying to adjust electricity wires above a busy street, and a tallish concrete truck driving by at an inopportune time. I had an (internal) chuckle and kept my distance, since there was no evidence to suggest that the wires were not live wires, or that the men were electricians by trade.

3. A little girl on her way to school with traditional white puffy decorations in her hair. They were easily as large as her head, one on either side, and the result was Star Wars/1970s wedding/cartoon.

Three days left of fall break. Alas and alack.
Posted by EJK at 5:27 PM No comments:

1. A woman with her arms wrapped around her ten-year-old daughter, in the middle of Erkindik Boulevard. The daughter was clearly disabled, gazing at the trees and groaning and dribbling a bit. The mother was soothing her by humming. They swayed together in this public place, and I couldn't get the image out of my head, because the woman was an Uzbek, and this is a country where the disabled put away; dumped in whitewashed institutions on the outskirts of the city and rarely mentioned in polite company thereafter. I have never seen such a sight in Bishkek - such openness and such an obvious bond between parent and child. The mother obviously couldn't have cared less about the openly curious passers-by, and that was deeply beautiful to me. I still picture them clearly, framed by autumn colours and caressed by the breeze.

2. Every morning on my way to school, at the same time, I pass a Russian woman in her mid-fifties. She is surrounded by plastic bags and swarming cats, under a tree in a crumbling apartment block. She is pouring milk into bowls and feeding scraps, and talking to herself/the cats all the while. Again, this is a rare sight - someone paying attention to and caring for the stray animals that roam Bishkek. (I also passed a stray ginger cat with a broken leg, mewling in the gutter, and trying to defend its territory from dogs. I cried for a long time afterwards because there was nothing I could do - not unless I change vocations and start looking after the needy animals everywhere, which is a job for a hundred people who are not otherwise occupied. So, I pray the prayer for the thousandth time - Lord, let their suffering be mild and their lives short).

3. An old woman, bent double, dressed in ancient and innumerable layers of wool, a walking stick in one hand and a crumpled plastic bag in the other, crossing the street. That's all. Not unusual. But most likely, she lives on a pension that doesn't extend to, you know, food. She might beg. She might go through trash for food. She might not have family. She's probably Orthodox, so maybe the church helps her. I don't know. But every atom in my body cries out to - what? Do something! - and the realisation that I cannot is crippling - not so that you'd notice, since my back isn't bent like hers. But something is bent.

When I first arrived in Kyrgyzstan nearly three years ago, seeing orphans and cripples and elderly and stray animals and homeless people every day was an impossible sadness. I would give money to old women to stop them going through my trash. I would buy cheap sausage meat to give to gutter dogs. I would buy samsi from street sellers and give them to gypsy beggar boys. I still do. But it is never enough. I cried from guilt and shame and then went from my well-heated flat to my vibrant workplace and ate all the food I wanted, plus more besides, and laid down in a safe, comfortable bed. I could choose to forget when I wanted to, which was often.

Like most people, my gut reaction is emotional - visceral - burdened. It should be, I think. It would be evil not to care. James wrote that to look at your brother and sister in need, and do nothing, is a lifeless faith - dead faith. Tim Keller's excellent book, Generous Justice, has been helpful in shaping how I think/feel in response to these things. It affirms that God's constant call is for social justice; that He cares for the orphans and the widows and oh, how He cares, and how He will restore them, and how He gives us hearts like his, to sorrow and weep with Him. I want a heart like His, and so I will continue to let it break. I will also continue to trust in His promises of restoration and justice, and rejoice that He is good. It is possible to weep and rejoice together, you know. It isn't comfortable, but it's all there is.

By the end of 2013, I will have been in ten countries. Several more than last year. Let me explain. No, there is no time. Let me sum up.

To begin with, I was in Thailand with my sister and parents for the new year, before coming back to Kyrgyzstan for the second semester of school. In March, I was privileged to travel to Germany for a conference, stopping in Switzerland on the way to visit an old friend, and swinging by France, too. By the end of June, I was very happy to return to Australia for some TLC, but not without a two-week stopover in Korea to visit past and present students.

Once returning to Kyrgyzstan, I led a wonderful group of students to Hungary for a conference. This adventure was quickly followed by a weekend in Kazakhstan, where I met a drama teacher to discuss a new production. And now, as Christmas approaches, I am planning to be in England with family, and quite possibly stopping by Scotland as well.

I think I have some kind of disease, where I must travel at least every three months, or risk keeling over. I am reluctant to be cured, though. As a single person living on a volunteer's income, I am whole-heartedly thankful and aware of my blessings in this regard - a workplace that pays for me to attend conferences, family members who contribute to plane tickets, an organisation that puts my health and wellbeing first. God knows my love of travel and is giving it to me in abundance. I don't know how long this patterned lifestyle will last, but I embrace it and acknowledge the wonder of it, right now.
Posted by EJK at 12:09 AM 1 comment: