We took our high school to a local village for our own Kyrgyz day on Friday. Despite the forecast of a snow storm, the day was fresh and lovely, and only began to turn grey and bitter as we were waiting for the marshrutkas. A blessing of a day.

The day began with a public slaughtering and butchering of a brown sheep, which elicited a response of horrified fascination from our kids, ranging from retching to close-up filming of blood and guts. This sheep was then served to us as beshbarmak, and became the basis for a reflection on the imagery of the sacrificial Lamb.

We were also treated to a number of Kyrgyz games. The highlight was definitely when the village men demonstrated their horsemanship for us. The Kyrgyz people are horse people: their horses are like another limb, and they ride with incredible dexterity. This clip below is a game where they must collect a number of markers from the ground - the quality isn't good, being of the iPhone variety, but it is still great to see the way the horses respond to their riders. 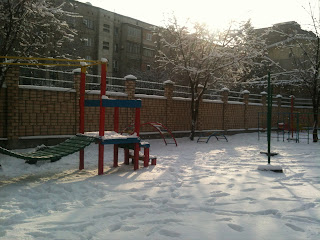 The Morning Walk to Church

Every great Soviet city has an 'Eternal Flame' monument, and Bishkek is no different. Here's an early morning shot of ours, illuminated by sun and smog. You can see the beautiful mountains in the background. 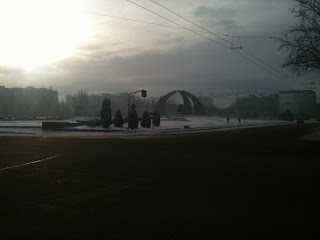 A little taste of local life...this is the best tandoor in Bishkek, and it's only 5 minutes from our apartment. We stopped here on the way home from church this morning for some delicious warm lapyoshka. The tandoor oven is in a pit in front of the baker. You could live contentedly on this bread, as, in fact, we do.

(My flatmate thinks this baker is extremely cute and particularly likes to buy bread when he's working. He was very shy about getting his photo taken.) 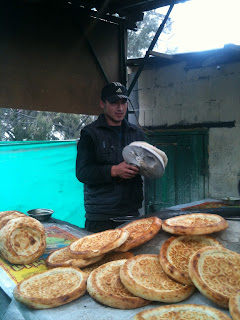 It's time you saw my classroom! Here are some interesting and colourful things that are happening on my walls: 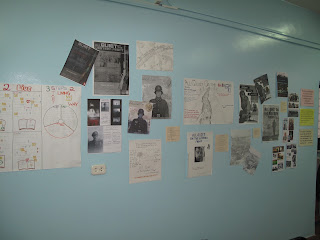 One class recently read All Quiet on the Western Front: here are their posters for the novel. 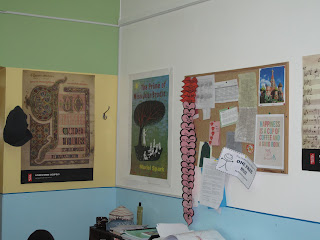 This is the corner above my desk, nicely decorated with posters from the British Library, hearts and kisses from Valentine's Day, and other pleasing miscellany that contribute to the clutter in which I spend my days. 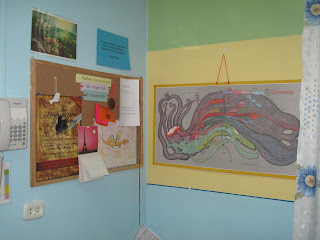 You will notice several things here: a laminated Bruegel, a poster for our upcoming school play, The Importance of Being Earnest, and a thoroughly stunning poster that is a graphic representation of the history of science fiction (a Christmas present from a discerning cousin!) The thing to the side that looks like a shower curtain is just a window curtain, which I hate with all the hatred in my being, but with which I am stuck until my Russian cleaner (who has a decidedly proprietorial approach to her job) changes her mind.
Posted by EJK at 10:57 PM 1 comment:

My memory isn't the best. It's a genetic thing on my father's side. At least, I like to think so. That's what the members of my immediate family tell each other when we forget where we put the laundry, car, etc. This week has been a particularly bad specimen, however, and I don't think it can be attributed purely to inherited traits.

My first piece of advice to anyone visiting Bishkek is to make sure you have a Visa card, not a Mastercard, since only a handful of machines in the whole city will take Mastercard. I had to pay for our bills today, and being cashless, had to walk a substantial way to the nearest ATM machine that works with my card. Lo and behold, upon getting there, I couldn't remember my PIN; the very same PIN that I've been using for the last three years without a problem. I stood there uselessly, trying to picture the number pattern, but without success. I forwent the third attempt, because the idea of the machine swallowing my card was too horrendous to contemplate. So, I had to walk back to school, ask for a cash advance on my small monthly stipend, exchange the US dollars for som, and subsequently find a machine that would let me pay my bills.

This poor memory isn't confined to personal identification numbers; I've been forgetting many things lately. Like tonight, when I couldn't remember that word for someone who rejects technology (Luddite!! Luddite! It came to me as I was writing that sentence), or earlier today, when I forgot to meet with a student. I think it's temporary - I'm tired, stressed, and iron deficient. A nice spring break week, and I'll be right as rain.

I'm reminded of this poem that a friend posted on her blog, months ago.

The name of the author is the first to go
followed obediently by the title, the plot,
the heartbreaking conclusion, the entire novel
which suddenly becomes one you have never read,
never even heard of,

as if, one by one, the memories you used to harbor
decided to retire to the southern hemisphere of the brain,
to a little fishing village where there are no phones.

Long ago you kissed the names of the nine Muses goodbye
and watched the quadratic equation pack its bag,
and even now as you memorize the order of the planets,

something else is slipping away, a state flower perhaps,
the address of an uncle, the capital of Paraguay.

Whatever it is you are struggling to remember,
it is not poised on the tip of your tongue,
not even lurking in some obscure corner of your spleen.

It has floated away down a dark mythological river
whose name begins with an L as far as you can recall,
well on your own way to oblivion where you will join those
who have even forgotten how to swim and how to ride a bicycle.

No wonder you rise in the middle of the night
to look up the date of a famous battle in a book on war.
No wonder the moon in the window seems to have drifted
out of a love poem that you used to know by heart.