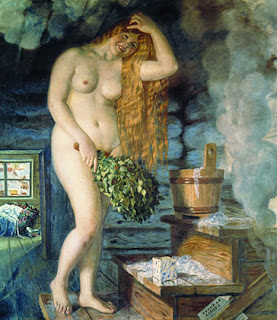 Here is a medieval description of a banya (lifted from wikipedia):


I saw the land of the Slavs, and while I was among them, I noticed their wooden bathhouses. They warm them to extreme heat, then undress, and after anointing themselves with tallow, they take young reeds and lash their bodies. They actually lash themselves so violently that they barely escape alive. Then they drench themselves with cold water, and thus are revived. They think nothing of doing this every day, and actually inflict such voluntary torture on themselves. They make of the act not a mere washing but a veritable torment.

My friend V rightly suggested that a banya experience was necessary for anyone seeking true cultural immersion, so we visited one of palatial and Roman aspect this afternoon. The whole complex was a maze of massage rooms and pool rooms. There was a posh restaurant with white tablecloths, strange enough in Bishkek, but stranger still to see it peopled with large Kyrgyz women wearing very, very little. Of equal oddness was the Karaoke room next door, presumably for light entertainment in between stages.
First stop, the steam room: within seconds, the skin drips with sweat and the lungs feel scalded. Ten minutes tests the endurance, but the idea is that you have a cold shower or a swim and go back in a couple of times, after which you are quite refreshed. In this lightened mood, you might go for a massage, which is a violent procedure but surprisingly effective. (I'm pretty sure she actually punched me at one point.) The whole thing takes about two hours, and it's marvellous, though I can't see it really taking off in modest, prudish Melbourne.
We followed up our cultural experience with a very good meal and some chocolate ice cream and good conversation. Thus, I retire now in a pleasant stupor of relaxation.
Posted by EJK at 11:00 PM