I recently got back from the most delicious adventure, and I must write about it immediately. The obstacle is that I have four hours of Russian language classes every day for the next month, which I started today, and pretty well all my brain cells are rushing to the sight of this endeavor. So, I've decided to break the adventure down into itty-bitty pieces.

Kyrgyzstan has a fledgling tourist trade: 'industry' is not quite the word for it, yet. This country has extraordinary landscapes, hospitable people, unique cuisine, but it lacks the means to advertise itself to the world. For my part, and the part of the other foreigners who are fortunate enough to have tumbled into it, this is a pleasing circumstance. I and my friends, C & E, arranged our trip through CBT (Community Based Tourism), a splendid organisation which facilitates yurt stays and hikes and treks and allows people to enjoy the hospitality of Kyrgyz families, while also providing such families with some much needed income. Our guide was Azamat, a young man who works night shifts, studies linguistics, and happens to have outstanding horsemanship. He also brought along his girlfriend Nazgul (yes, Tolkien lifted that name from Central Asia). They picked us up in Bishkek on a sizzling hot day, so naturally there was a traffic jam on the way out; but once in the countryside, the air cooled considerably. Our first overnight stop was in Koch Kor, a sizeable town where Azamat's parents live and provide CBT hospitality. Our very first sight was this donkey! Donkeys are so cute, but I restrain myself from obvious expressions of delight because the donkey is the equivalent of a pick-up truck, and to go all gooey over such a creature would incur quizzical looks. There were also the obligatory relics from an earlier age. 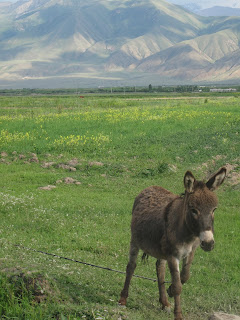 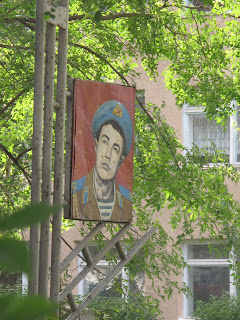 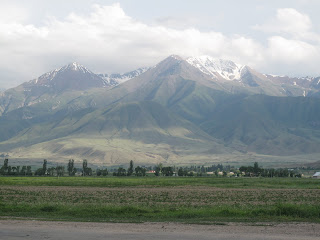 We enjoyed Azamat's family very much. Indeed, it's rather a beautiful thing to see a traditional Kyrgyz family in action. Three generations living under one roof, including a fat-cheeked baby called Adiz who was the apple of everyone's eye. We were served endless cups of chai around a low table, along with fresh borsok (fried dough), fresh cream and butter from the family cow, homemade preserves and a big potato and mutton stew. Following this, Azamat's mother showed us some of her crafts, including a rather astonishing tapestry-like creation of Lenin's head: (Lenin was, and still is, a very important figure to the older generation). 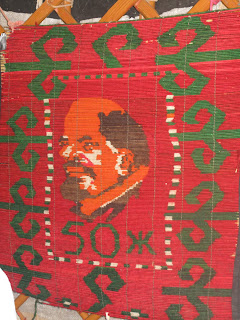 We walked around Koch Kor for a bit and were struck by the children playing in decrepit old Soviet-era playgrounds and schoolyards. They were very happy to play and have their pictures taken, and were pleased to be spoken to in the few words of Kyrgyz that we knew. 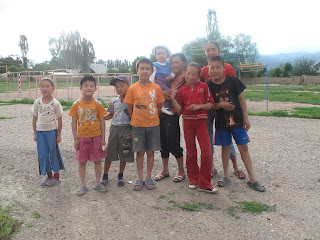 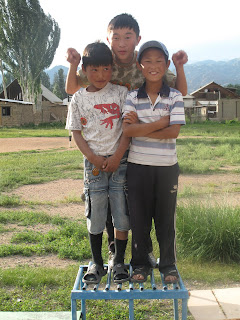 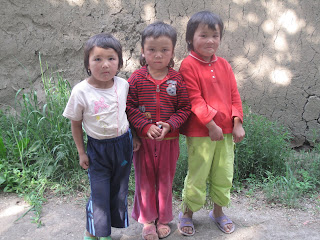 I'll stop there, because I have to do my homework (homework!) which includes, but is not limited to, a list of 40 vocabulary words. Part 2 tomorrow, then: folk heroes, Kyrgyz saddles, and some of the loveliest scenery you ever saw.
Posted by EJK at 7:40 PM