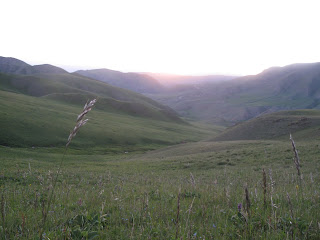 The second day opened with a delicious breakfast of kasha (a sweet semolina-like dish) and fruit preserves. Along with chai and coffee, we were also offered one of the great Kyrgyz delicacies - kumis! Kumis is fermented mare's milk and it is highly prized: it's sometimes referred to as a 'pipe-cleaner' for its alleged benefit to your innards. Azamat drank it like water; I bravely accepted a cup, tasted, and decided the only way I was going to get through it was to scull it down, which I did, to the acclaim of all. Thus, I add the fermented milk of a horse to a growing list entitled, 'Interesting Foodstuffs I Have Ingested (Intentionally or Otherwise).'

A little way out of Koch Kor, we met our horses - near this tomb to a great Kyrgyz ruler of the eighteenth century. 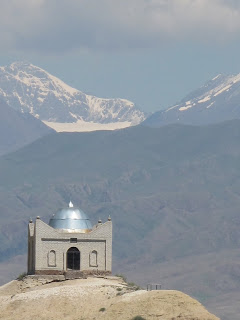 Also nearby was one of the random Soviet relics that I am growing to appreciate: 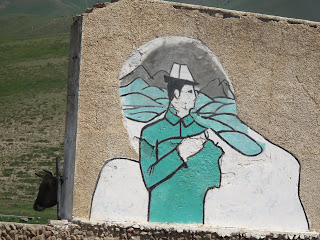 Kyrgyz horses are famous for their breeding and their training. They are small horses, but sturdy, and extremely responsive to their riders. Genghis Khan himself thought highly of them. The horses are usually named for their colour, so I found myself riding 'Mud-Brown'. We got on extremely well. He navigated the rocky climbs and narrow paths with ease, and cantered when I asked him to. We climbed very quickly to about 4000 feet, and the view from horseback was exhilarating; I could easily imagine myself as a conqueror, and understood better the reason why possession of this region has been disputed through the centuries. You can't tire of the gorgeous sweeping mountains, or the flat steppes at the base of them.

We stopped for lunch by a glacier river, eating fresh lapyoshka, salami, smoked cheese and dried apricots. Here are Azamat and Nazgul, our delightful guides and friends: 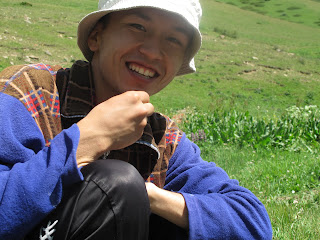 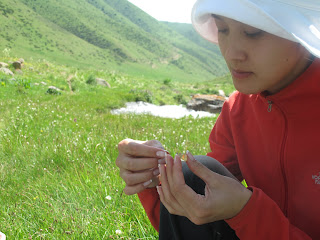 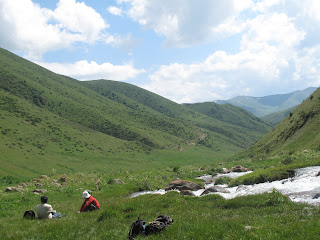 We reluctantly left the valley and continued riding for several hours. Finally, as the sun began to set, we reached an isolated yurt on the jailoo (the high summer pastures) which was part of the CBT program. We were immediately settled inside the yurt and fed fresh borsok and yoghurt. 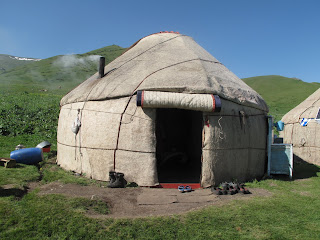 I made friends with two of the children and we went and played in the hills for a time. They made me posies of flowers and brought me wild onions to eat: I used my three words of Kyrgyz to great effect, and they showed off their magic tricks and animal sounds. 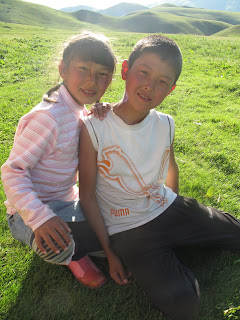 Then, as dusk began to set in, the jailoo took on new hues and beauty: 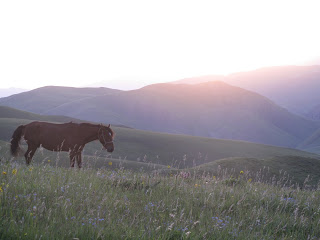 After an excellent dinner and a good sleep under piles of tushuks, the dawn was bright and warm. The daily milking of the mare was an interesting beginning to the day. (Can you spot the snow?) 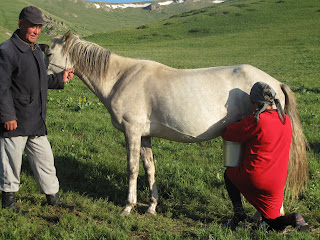 But then, that's Day 3, and I'm exhausted after many hours of Russian. I learned fruits and vegetables today: also, I can count to 10,000, no mean feat when you consider that this time last week I could only count to 10. These Russian teachers are old-school and they don't mess around. If I don't do my homework, they will make me feel like a naughty child.
Posted by EJK at 6:58 PM