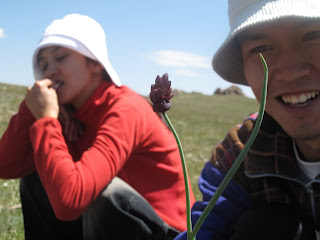 Here is Azamat, holding up a wild onion. We ate them in sandwiches on the third day. 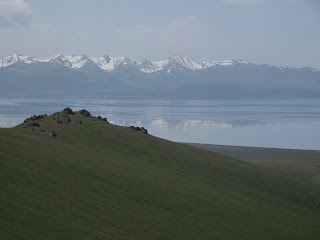 This was our first glance of Song Kul, which means 'Comfortable Lake'. Legend has it that when Genghis Khan saw this lake he slaughtered nearby villagers out of anger, for hiding such a beautiful lake from him. It is only accessible between June and September, and there are no facilities here except for the yurts and food that the local shepherds provide through CBT.
The lake is surrounded by plains such as the one below, on which Azamat is trying to teach me how to gallop. I never quite got to a gallop, though I dearly wished to. 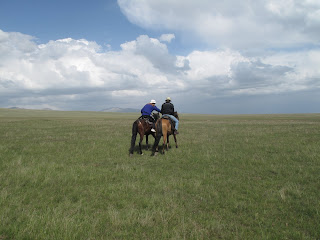 We stayed in the yurt on the far left, and were fed like royalty on excellent cream, butter, yoghurt, jams, flatbread, plov, kasha, borsok. These nomads eat a dairy- and carbohydrate-rich diet, but they need it for the extreme conditions under which they tend their animals, particularly in winter. We asked if we could have fresh fish for breakfast, and sure enough, it was waiting for us, fried and delicious! I ate three of the things. 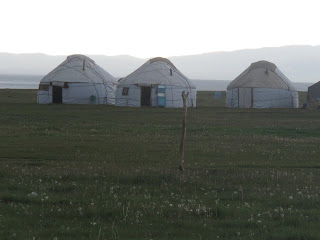 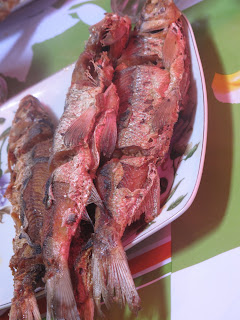 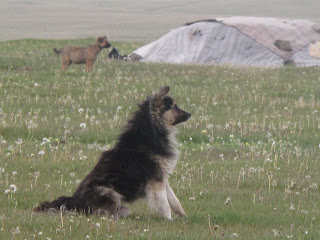 The lake was beautiful: untouched and still. I spent some hours walking and reading and just sitting by it. I finished Marilynne Robinson's 'Home' by the shore. (That's not me, that's Nazgul). 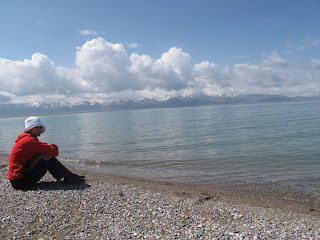 Eventually, it was time to go, so Azamat rounded up the horses and proceeded to gallop all the way back to Koch Kor, leading the horses on ropes, while his brother Nurdin drove us home to Bishkek (about 6 hours) in his rattling, overheated car. The two brothers took as much kumis home as they could carry! 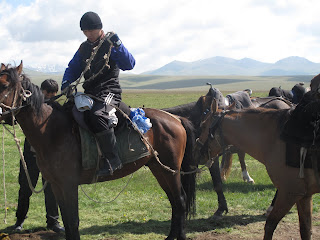 Three notable events occurred on the way home: we stopped at a 4000 foot pass and drank from a glacier waterfall: we came across a herd of yaks: and we were stopped by patrolling policemen who were searching for illegal guns. 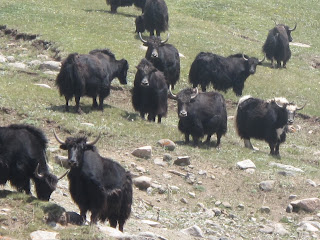 Thus ended the Adventure. (Well, not really: arrived back in Bishkek at midnight on Sunday, lugged my bags up seven floors, and realised that I was locked out and that my phone had 4% power left on it, and that I was starting class early on Monday morning. But that's another story for another time).
I have a couple of free days at the end of July, and I'm thinking of doing a similar trip in Naryn through Shofar Group, which was started by a couple from my own organisation: their aim is to eventually hand over the whole business to local guides. If you're looking for a unique and locally sourced holiday, Kyrgyzstan is the perfect place - so long as you're free between June and September!
Posted by EJK at 12:37 PM